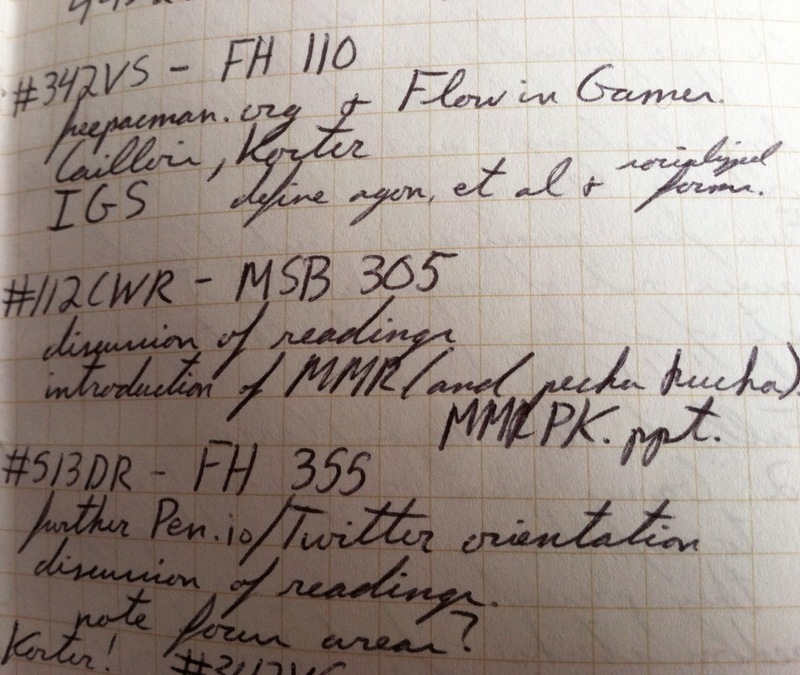 Two weeks into the semester and I'm still talking too much. I suppose that doing so is important/necessary in helping all students understand all course aspects while moving forward. Talking more in #342VS and #513DR also makes sense because I designed each course as an introduction to an academic field of inquiry. As students may not know that much about videogame studies or digital rhetoric, I suppose I'm the resident expert. Furthermore, as students may not know much about tweeting (for academic purposes or otherwise), I'm the one to dominate their Twitter timelines. I remain concerned about precedent, though. If I'm the one introducing, modeling, and outlining everything, what reason will students have to rely on each other later? That first day of class gives so much power to the instructor. I suppose at least some of the rest of the semester will be spent giving that power back to students. I expect many to resist.

The tools I ask students to use is decided in part by this awareness. In addition to Twitter, which is perhaps the lone constant over the last 3 years of teaching, students in all courses this semester are using Pen.io. I also provided each #112CWR student with a Field Notes memo book for in-class writing and to maintain a more direct line of communication with me.

Part of the reason for the switch to Pen.io concerns how last semester's blogs became more and more informal. I didn't do much to discourage this because I think that one of the best ways to get better at writing is to write a lot. Blogging can be a productive aspect to almost any kind of writing-oriented class, but I wanted to do something different this semester. I wanted to do something different because Posterous, while a rather solid blogging platform, underwent significant changes and became a full-fledged social network. As I wouldn't be asking or requiring students to use any of the new features, I figured there might be something else that was simple and easy to use.

For the most part, I think Pen.io's proven me right. It's pretty close to featureless (but allows for HTML), which is fine for what I'm asking. While talking too much about course particulars, I explained to students how it might be helpful to view their Pen.io work as comprising an online portfolio, the idea of which I first explored while an M.A. student at TAMU-CC. Some of the more tech-savvy students miss having an autosave feature as well as any way to implement Google Analytics, but the majority across #112CWR, #342VS, and #513DR don't seem to have found any substantial lack in the service. With a substantive Pen.io page and 5 tweets due every week, I think all students will be able to maintain online presence as required without difficulty.

Now, regarding the sustained use of Twitter, I was very close to eliminating the "experiment" hedge of the Twitter assignment. As a communicative format and as a distribution channel, Twitter's become a vital part of my professional work. If I wasn't on Twitter, I can't imagine how many important discussions related to digital rhetoric and videogame studies I'd be wholly unaware of. I don't know how else I'd be able to keep up with all that's going on. This is not to imply that all one needs is Twitter, but what's to be found there can lead one down important avenues to elsewhere. If #112CWR students elect to do away with Twitter as a course requirement, I'll understand. If #342VS or #513DR students elect the same, though, I imagine I'll feel like a failure.

Of course, I may only feel that way because of how I designed these courses, i.e., what works for me. Using Field Notes memo books to ask questions, jot down ideas, and think things through works for me. Twitter works for me. Pen.io works for me. In this respect, I suppose I'm teaching students to be like me. Again, I expect many to resist (and they should…probably).