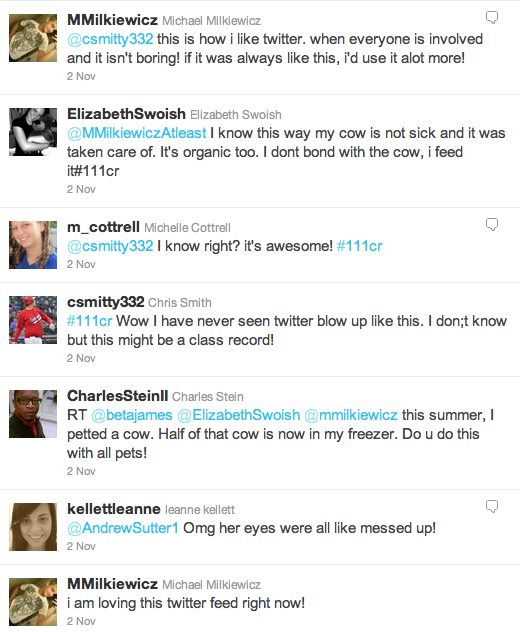 The above screenshot features tweets from #111cr students, all of which occurred near the end of the 11.2.11 session. Most express excitement, if not bewilderment, at how Twitter use reached a collective high during the second scheduled day of pecha kucha presentations. As of this writing, I'm still unsure of what caused the sudden, prolific, in-class tweeting among #111cr students. Part of me wonders if it was just some kind of a perfect storm.

Now, having to pay polite attention to whoever happened to be presenting as well as the lively #111cr Twitter feed couldn't have been very easy. For the first four presentations, there were 2-3 students live-tweeting the proceedings. However, something changed after a more personal presentation about fatherhood and fatherlessness. I've written here before about how quick student-to-student praise can come on Twitter and perhaps that is partly what caused the imminent "twitter blow up." Praise turned into further conversation about areas of interest. Subsequent presentations became launchpads for discussions of whether or not student athletes should be paid and whether or not to eat meat (and/or name the animal from where the meat comes).

This was surprising, too, given the quick pace of the session. In order to maximize presenting time, I had every student's PowerPoint file preloaded on the projector-equipped computer. Once a student concluded their talk, I was only able to offer a quick "thank you" and start a round of applause while queuing up the next presentation. Perhaps this lack of time to discuss and praise the student who just presented their early research led to the Twitter-based discussion and praise.

Of course, not all students participated in this particular event. Not all students had laptops or smartphones to bring to class, but those that did surely took advantage of their devices to engage each other. The question remains how to foster such engagement in future sessions…

This is also a question worth addressing in #252ac, though, because recent sessions have been evidence of a curious, unfortunate phenomenon. I consider this to be a potential side effect of the student-led facilitations, all of which were very vibrant and engaging in both face-to-face and online contexts. The two sessions since those facilitations have been less so. Face-to-face conversations have been stilted, if not stunted, with students waiting for me to call upon them before speaking. The #252ac feed is also much less active. It appears that resuming control of this course has made for less involvement on the part of students. If there's another reason for this beyond student-led facilitations, I'm interested to know it.

This is an unfortunate thing, too, because #252ac students worked through a new assignment, Distraction-Free Writing (DFW). Many of them posted great things about their distraction-free writing experiences to their Posterous blogs, so I'd like to conclude with some snippets:

Maybe it was my imagination but I thought this program would yell at you to keep writing, the deletion is bad enough to keep me going but I thought it would be really funny to have an evil drill sargeant(sp?) of sorts yelling inspiring or even cruel or mean things at me to keep me motivated to write. Having said that though, every time the screen starts to go pink I get a rush of fear, to type something, anything at all. It kind of feels like someone is standing behind me with a gun to my head forcing me to write. Alright, that is a little dramatic, it doesn't feel like that at all, but perhaps it would if I was working on something of importance.

I just paused this program and it came with a serious warning that this was only allowed once. I am very tempted to pause it again to see what happens...but I won't, at least not until I am finished.

Omm would be a more apt tool for something creative or profesional, aka a longer peice of writing, while WriterorDie is more of the traditional journal entry, vent or overall emotional dump that requires the user to both stay focused and not interupt their thought process. I see how this can also be used for a brainstorming tool, or if your blocked.  Distraction free wirting is definatly something to keep in mind in this new day and agae where distractions, while not more in number, are more available when working on a laptop or computer.

It is different to have nothing in the way of my writing. I like that I can write and not have to think about who is getting on or off line and wondering if someone getting on is going to message me. It helps that I can focus solely on the page and write what I need to without any disruptions from my other programs. It is an amazing feeling to strictly be focusing on the ideas that I have for writing and not worry about the other things surrounding my word document.

With Q10, I feel encouraged to write and I'm going to write my short story (Final Project) with this program - I might even use this for my novels because it is saaaweeet not to see 'twitter' popping up, emails, or chats. When I see anything like that, I have to stop and address them and my focus isn't on writing anymore. I will admit, guiltily, I like Word - I like seeing my pages and knowing all the 'fancy' stuff I can do with it but now that I have branched out to this tool, I don't think I will go back to it unless I'm on another computer. One other thing: I type so much faster on Q10, just hearing the typing sound brings back a lot of memories and I seem to just 'flow' and I do make fewer errors this way too - odd.

Writing in the distraction-free space was slightly unfamiliar and foreign. Especially with Q10, not being able to see anything but the screen was weird! I don't know if I can consider my feelings with the DFW tools as nostalgic or romantic but it did make writing more simple. These tools encourage free-flowing thought and probably more creative-type writing. If one is attempting to type some sort of research paper or academic paper with a lot of requirements this tool would not be ideal for me at all.

for being defined as a DFW program, Write or Die seemed distracting as all hell. I found myself staring at the timer just as much as I was the words I was typing, and the reddening of the screen as I attempted to navigate around brief writer's block was no help either. I discovered that hitting the space bar and backspace alternately could stop the screen reddening from happening. I guess that could be defined as a reaction to a distraction that continues to distract. Maybe I'm being over analytical, and I'm sure that Write or Die has settings to remedy those things, but my first impression of the programs wasn't all that great. Interesting, but not great.

Wow, I am having a lot of really bad typos, but there is no time to go back and fix them all because I have a time limit, but honestly, this isn't exactly how I expected it was going to be. When I heard people talking about Write Or Die in class, I assume it was going to have a crazy game-like interface where I was going to get eaten by sharks if I didn't keep writing and keep in front of its sharp teeth which meant I would have to write really fast to get there and stay ahead of it, but I guess that would be considered distracting which is opposite of what the assignment is, because all I would be able to think is "Stay ahead of the shark! Stay ahead of the shark!" And I wouldn't be evealutating this like I'm supposed to and I would be going back and fixing these annoying typing errors and I'd probably be paying more attention to my teacher in this class.

I found that when I stopped typing for a few seconds, the program started to turn shades of pink (just tested it again, and the pink continues!). It starts out with a lighter shade of pink, and then gradually goes to dark red. My first text from this was fairly funny at the beginning, because I all of a sudden started flipping out when the pink started to show up in the first line or two. I let it go for a while at the end to see what would happen if you let it get to red, and it STARTS DELETING YOUR STUFF!

I do like this ambiance. I truly feel like Robert Frost. One thing though is that it kinda makes me want to type slower so that the noise sounds more like drip drops. I really am enjoying this as an experience and might be tempted to use it often. Especially for creative pieces. I wonder though if there would be something like a distraction free resource that can provide different moods than just calm. For instance if a person was interested in writing a piece that focused on portraying the emotion of anger, is there a background that is more chaotic and exciting instead of soothing? I wonder then as I guess with all of these backgrounds and such how influential they are to what you write. I wonder if one day they can lay any claims to pieces that were written using them. Or if one day soon we will have to cite which processor we use.