This may be the earliest in the semester I've thought about course changes. I fear it is too late to implement any right now (at least in #111cr). Course changes are under consideration because of what I've gleaned from both direct questions and more general course discussion on Posterous and Twitter.

Now, I like to think certain aspects contribute to one of the larger ideas about the courses I teach, i.e., that students can and should take greater ownership of what happens in class, that a given course is theirs as much as it is mine (if not more so, since they're paying for it). In particular, student-led facilitations occur in accordance with the idea that having students teach other students leads to better comprehension overall. Furthermore, having both student-led facilitations and presentations so early in the semester allows for students to introduce themselves again to the rest of the class, but in a more formal way. There's a chance to make a greater impression than on the first day of class when everyone goes around the room saying their name, major, etc.

However, I may stagger facilitations and presentations more in future courses. Doing so might eliminate what I call "facilitation fatigue" on the part of the student audience. With lecture being the unfortunate default mode of delivery in student-led facilitations, I saw some students already tiring by the second and third sessions. And, rather than facilitations happening in succession, one right after another, I'm also curious if spreading them out might keep the course fresher and more cohesive, perhaps even allowing for greater collaboration with students.

So, instead of a facilitation on MLA citation/format one day and a facilitation on style the next, the instructor could introduce an assignment or area of focus one day and then work with students to develop in-class activities for the subsequent session. There might be more course cohesion overall, with facilitations feeding into or expanding on what the instructor introduces. Perhaps part of the first-day activities should not only be learning what students want to get from the course but also setting up weekly topics to consider in tandem with larger assignments. I'm already leaning toward this by having students read about and discuss plagiarism in relation to the Mashup Scholarship assignment.

My curiosity about more staggering in my courses applies to scheduling in-class research presentations, too. This would elongate a given assignment sequence with the potential to open up new facets, allow for more student prep time, and maybe eliminate the kinds of redundancies already witnessed in #252ac with regards to the MRW pecha kucha presentations.

I should stress that contemplation of course changes has very little to do with student performance. I've been quite impressed by what #111cr students put together for their facilitations. Despite some clear overlaps in examples of and thinking about media representations of writers and writing, I've also been moved by a number of #252ac students' pecha kucha presentations and I know I'm not alone on this.

Regarding #252ac presentations, too, I should mention that I've encouraged students to live-tweet. One thing I've noticed is that therein lies the possibility for immediate feedback. I know of plenty of horror stories about mean-spirited backchannels at conferences, but the atmosphere in #252ac is quite collegial. When one student began with a disclaimer about how he wasn't very accomplished at public speaking, those in the audience took to praising him. 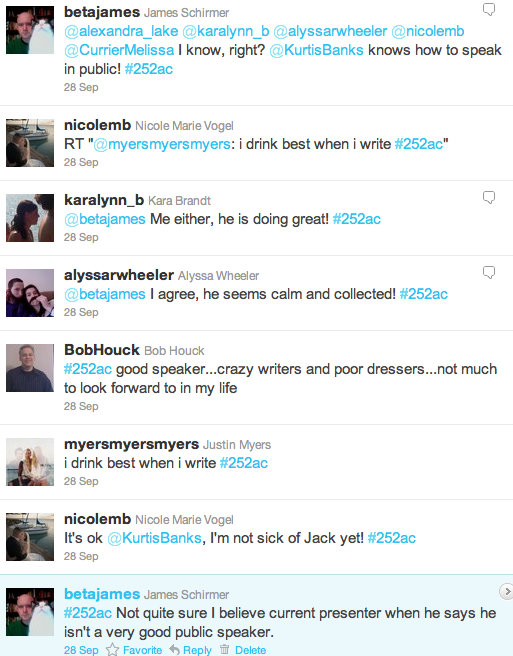 The above screenshot appears to show that I prompted this, but I only joined what was already a vibrant conversation. Other students took up my prompting and agreed, directing their mentions to this particular presenter who later acknowledged and thanked them.

I realize the length of this particular post, but I want to observe one more thing. In #111cr, we're about to wrap up reading Graff and Birkenstein's They Say / I Say (TSIS) and it was with some disappointment that I fielded questions about returning this required text to the bookstore. I understand at least one reason why students asked, but I tried to stress in my response the unique importance of TSIS. I may not have given an adequate explanation then, so I want to stress here that TSIS remains one of the most helpful guides in my own written work. I required this text because I not only agree with the authors' approach to academic writing but also because I think it has sustainable usefulness. The texts I require in my courses should be important in at least two ways: 1) for preparation and immediate use in the present course and 2) for future reference. If I can't find a text that fulfills both requirements for a course I teach, I don't place an order at the bookstore. TSIS is one of those texts that I will continue to require in first-year writing courses for the foreseeable future.

associate professor of english at the university of michigan-flint.